Martin Parr’s Latest exhibition ‘Oxford’, has just opened as part of Photo Oxford 2017 at the Bodleian Library’s Weston Library.  This exhibition won’t disappoint Parr fans, but it raises some awkward questions for its sponsors, Oxford University Press (OUP) and the Bodleian Library – especially the accompanying book. Parr was commissioned to take a characteristic look at Oxford University as part of a much larger project in which he examines the British ‘Establishment’ including leading public schools, the Army, the City, and now, Oxford University. He spent three years working on it making about 50-60 visits from his Bristol base.

Basically the content of both book and exhibition fall into three overlapping elements. The first is the portrayal of Oxford as a bunch of eccentrics; the inter-college tortoise racing competition, the woman and her dog  which has been re-categorised as a cat because dogs are banned from colleges,  a dragon having tea at the Oxford University Tolkien Society garden party, school kids scrambling for  pennies ‘served hot’  after ‘beating the bounds’ of the  city centre parishes with hazel switches (we are informed that the practice has ‘been curtailed after a hot penny was caught in a woman’s cleavage’),  ‘Teddy Hall’ students standing on chairs  in the dining room to sing the college anthem ‘Teddy Bear’s picnic’. So far, so charmingly batty. Second the power of money; Lunch for guests attending Encaenia – the annual degree giving ceremony,  in the Codrington Library at All Souls; the annual meeting of the Chancellors Court of Benefactors, whose members must have donated £1.5m or more to the University. The event is a dinner. And finally the intersection between these two, which  can be characterised as endless partying and jollity by both students and academics alike, the more eccentric and boisterous the better; the boat race on the Thames, the ‘Varsity’ match against Cambridge at Twickenham, the end  of finals involving plenty of champagne and dunkings in the river.

The river plays an important role in these photographs. Eights Week, the annual summer term rowing competition in the quaintly named Trinity Term,  is a rich seam of excellent photographs for Parr, as are Summer Balls, Anniversary Balls, various formal dinners to commemorate saints days,  strange dining habits like ‘Lord Bathurst’s fingers’ at All Souls (gigantic ‘tongs’ to facilitate passing the port round in case your neighbour is too sozzled to oblige), May Morning,  and of course the garden parties and other formal celebrations associated with Encaenia. Harry Potter and Hogwarts get a walk on-part in the Christ Church dining room.

Parr does turn his lens on the research and teaching side of the University and there are some lovely pictures of blue and great tit researchers in Wytham Woods, staff and students at the Ruskin School of Art, researchers in the Department of Engineering, and some college tutorials under way, but they seem to be almost incidental to the main objective – partying.  Perhaps this is because they aren’t so naturally photogenic. Chucking people into the river and drinking clubs on display certainly make for great photos.

Oxford in this book trades on its traditions and its eccentricity – Bedels, Scouts, Bulldogs, Proctors, page-boys; are all here in force. 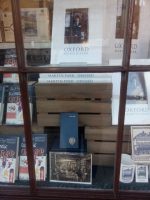 Amusingly, when it comes to selling it, Blackwell’s definitely have the measure of the book, pairing it in their window display with a selection of posh tat – bone china mugs, wooden jig-saw puzzles and the like, and  copies of ‘Eccentric Oxford’.  It may be a book about ‘the Establishment’ but its ostensibly subversive theme doesn’t quite get it into the Owen Jones or Thomas Piketty category in Blackwell’s eyes. Rather there is a sense of devil-may-care privilege recorded in the pages of ‘Oxford’; Fawlty Towers meets Trump Towers.

Parr is no fool; he steers away from the tourist post card tropes of punting on the river and undergraduates cycling past honey-coloured buildings in gowns. But there are some surprising omissions. Nothing on student politics (tempting as it is, I don’t count George Galloway at the Oxford Union as student politics), popular culture (the Wadham ‘Queerfest’ might just count, providing one of the most striking pictures in the book) student theatre, field trips, or some of the interesting student experiments in sustainability like the Hogacre Common urban farm project, all fertile opportunities for original pictures and a more rounded view of the place.

Parr’s photos are paired with what has to be the oddest contribution to any photobook I’ve ever seen; an afterword by author Simon Winchester.  It has clearly been written for another audience. He might have taken the opportunity to provide a perspective on Oxford in photographic history (from Henry Taunt and Lewis Carroll through Laszlo Moholy-Nagy to Paddy Summerfield), or perhaps some reflections on Parr’s work in Oxford in the context of his wider work on the Establishment, or even a critique of contemporary Oxford as an institution (so no shortage of material to work on). Instead over 35 pages he takes us through a nostalgia-fest of his time as an undergraduate 50+ years ago, when a student coming up to study Geology was interviewed by the English tutor (!) and was admitted on the basis of an interview where he was asked whether he went to the movies and if so why, and an exam which asked if the American way of life was exportable (we now know that it is). Neither Parr nor his photographs are ever mentioned. It is in striking contrast to Cas Oorthuys’ photobook ‘Term in Oxford’ published in 1963 with an introduction by Alan Bullock. In it Bullock muses on how Oorthuys’ photos have changed his perception of Oxford and writes knowledgeably about how Oxford was changing and what this means for the University, the city, and the society it serves.

Publishers of the prestige of OUP don’t do this by accident. Taken together, text and photographs in ‘Oxford’, give an impression of a celebration of unreflective privilege. It may be a triumph for Martin Parr (though he can’t be that happy with the books production values; many of his best pictures are  split over two pages), but it feels like a public relations disaster in the making, for Oxford University.