There is a long tradition of books about what is wrong with conventional economics; ‘Limits to Growth’ for example, was published 45 years ago.  The intervening years have seen quite a few of their ideas absorbed into mainstream thinking and some of their prophesies come to fruition. But It is a cause of frustration to many in the world of sustainable development,  that economics as a whole remains dominated by ways of thinking that are often characterised as neo-liberal, despite its spectacular failure to understand let alone mitigate the  global financial meltdown a decade ago.

Now economist Kate Raworth has come up with a radically new way of thinking about both economics and sustainable development.  Her book is called ‘Doughnut Economics: seven ways to think like a 21st century economist’.

There is a lot in this book, indeed George Monbiot is quoted on the cover as saying, ‘I read this book with the excitement that the people of his day must have read John Maynard Keynes’s General Theory..’  and  a chapter is devoted to each of  the seven ways to think like a 21st century economist; change the goal, see the big picture,  nurture human nature,  get savvy with systems, design to distribute, create to regenerate, and be agnostic about growth.

So it’s a book of economics, but not as you know it. It is highly visual and it is full of stories.  Indeed the ‘doughnut’ of the title puts me in mind of nothing so much as Ebenezer Howard’s ‘three magnets’ diagram of the various attraction of town, country and garden city. In this case the pull of the magnets has been replaced by the concentric rings of the doughnut, where two concentric rings, or boundaries represent the planetary ecological ceiling and minimum societal standards that human beings can be in – with the space in between being the safe and just space for humanity. 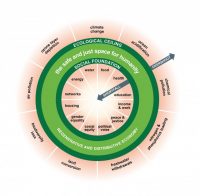 When you look at the picture it feels like an obvious restatement of the principles of sustainable development, with the social and economic dimensions; income and work, political voice, housing etc comprising the social foundation with minimum standards which none of humanity should fall below being the inner ring, and an ecological ceiling; climate change, biodiversity loss, ocean acidification etc beyond which the planet cannot survive and thrive, being the outer ring.  But expressing it visually is important to our real understanding, just as the concept of garden cities was hard to popularise without that three magnets diagram. Raworth recounts how in 2015  during the process of negotiating the Sustainable Development Goals – 17  globally agreed  goals for charting human progress the image of the doughnut was there on the table: the image fostered new ways of thinking invigorating old debates and instigating new ones, whilst offering a positive vision of a future worth striving for.

Some of the concepts are pretty familiar to people in the sustainable development world, but two of them stood out for me; ‘design to distribute’ and ‘create to regenerate’.  ‘Design to distribute’ is a brilliant debunking of the notion that inequality is inevitable,  hard-wired into the human psyche that it doesn’t really matter, and that even if it does, we have to go through that ‘phase’ to come out in a place that is wealthy enough to tackle the injustices and environmental degradation that it brought in its wake. It’s a policy choice of course and Raworth makes that clear. She rightly focusses on the redistribution of wealth rather than income, calling on policies that aim to redistribute wealth ‘especially the wealth that comes from controlling land, money creation, enterprise, technology and knowledge.’ She cites studies that demonstrate that higher levels of national inequality tend to go hand in hand with increased ecological degradation. Why? Because  in part, social inequality fuels status competition and conspicuous consumption summed up in the only half-joking US bumper sticker ’He who dies with the most toys wins.’ One study of all 50 US states found that those states marked out by larger inequalities of power in terms of income and ethnicity had weaker environmental policies and suffered greater ecological degradation. It is why President Trump’s ’base’ applauds his withdrawal from the Paris climate accords. It is a situation that has been vividly exposed in the politics of US ‘rust belt’ and other poorer areas; inequality does not make economies grow faster, it is more likely to slow them down – by wasting the potential of much of the population people who could be schoolteachers or market traders nurses or micro entrepreneurs instead have to spend their time desperately trying to meet their families most basic daily needs.  Over the past fifty years policies aimed at national redistribution have fallen into three broad categories; progressive income taxes, labour market protections such as the minimum wage, and providing public services such as health, education and housing. They don’t immediately sound like environmental policies – but they are sustainable development ones.

This leads on to the second insight, ‘create to regenerate’. This is the opposite of the ‘growth will clean it up’ argument. Instead look to create an economy that is regenerative by design. This is something that architects and planners are intuitively in tune with. As Raworth puts it, ‘Economics it turns out is not a matter of discovering laws; it is essentially a question of design.’ Design that is of an industrial system of a cradle-to-grave manufacturing supply chain of take, make, use, lose. Which applies to all the Earth’s minerals, metals, biomass and fossil fuels. Something like as she puts it, an industrial caterpillar ‘ingesting food at one end, chewing it through and excreting the waste out the other end’. Instead the ‘circular economy’ harnesses the endless inflow of the sun’s energy to continually transform materials into useful products and services. Farewell the linear industrial economy’s caterpillar, welcome the wings of the circular economy’s butterfly. This is where the ‘generous city’ gets a walk-on part ‘human settlements that nestle within the living world’. It is a system that having measured the metrics of the locality and recorded the rate at which  it harvests solar energy, sequesters carbon, stores rainwater, fertilises soil, or purifies the air, then challenges and inspires architects and planners to create buildings and landscapes that are ‘as generous as the wildland next door’.

‘Doughnut Economics’ is packed with inspiring stuff, much of it probably new to its apparently intended readers – economists, but the political activist in me worries that in painting some rather wonderful pictures, the nitty gritty of how to translate what is on the canvass to something approaching the real world of people’s lived experiences, there is a gap. Perhaps it is unfair to expect detailed policy prescriptions – after all they would be radically different between say the UK and the USA, let alone a first world country and middle or lower income countries around the world, but these ideas will meet with resistance from those who exercise power (they already do). Addressing the nature of power and how these ideas interact with the politics we experience, now much of it increasingly divisive and authoritarian, is a challenge we all face. Getting even a small proportion of these ideas implemented would make a huge difference, and the author of ‘Doughnut Economics’ should be congratulated for articulating them so cogently and creatively. Such ideas if they become common currency can shape debates and change agendas. Let’s hope enough of those with power listen and pick them up and run with them. After all Ebenezer Howard managed it.