The Child in the City 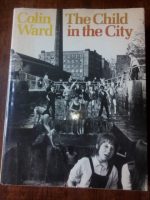 The Summer’s warm sunshine and cool breezes have brought people out into the street and the parks in numbers, and it has been a rather joyful experience after what has seemed like an interminable winter. Flowers, blossom, plants and birds have responded in kind; a profusion of sound and colour.  Seeing children outside enjoying the sun and their locality brings to mind Colin Ward’s book ‘The Child in the City’ which was published forty years ago (1). He was working for the TCPA’s Education Unit on a Schools Council project called ‘Art and the Built Environment’ a project that fused environmental study with the aesthetic and design aspects of the built environment. Eileen Adams who worked with Colin described the projects as ‘initially developed at a time when ideas of child centred learning, social justice and participative democracy permeated educational thinking.’ (2)  Life on another planet from today’s perspective. For Ward the objective of the book was simple. As he put it in the introduction ’This book is an attempt to explore the relationship between children and their urban environment.’ And he went on to ask ‘whether it is true, as  very many believe it to be true, that something has been lost in this relationship and it speculates about the ways in which  the link between the city and child can be made more fruitful and enjoyable for both the child and the city.’ The book’s publication in 1978 was a contribution to debates on how children,  boys or girls, rich or poor- their individual experiences are of course vastly different, could come to understand the city they lived in, develop a sense of place and promote in them a critical  stance to their surroundings. Children were and are actors in the space they live in, and he wanted the work he was involved in at the TCPA to be ‘a vehicle for the empowerment of the child’ (3).

The Child in the City has proved to be one of the most enduring of the thirty or so books that he wrote, with several reprints and new editions in the 20 years after its publication. His old editor at New Society Paul Barker, described it as ‘perhaps his most influential book’ stating; ‘The idea was simple. The right way to judge a city or any scheme of urban planning is what it delivers for children.’ (4) But measured against that yardstick how successful has it been? The answer is of course mixed depending on the experience of which child on which continent and in which social class one looks at; but in Britain the focus of most of Ward’s research for the book, the answers are not very promising. Hannah Wright and colleagues in their new book (5) spell out some of the losses and their impacts. In 1971 80% of 7-8 year olds walked to school unsupervised. Today it is almost unthinkable that a seven year old would do so and indeed the number has dropped to 9%.  Unsurprisingly 80% of the world’s adolescent population is insufficiently physically active, not just because of no longer walking to school, but because of insufficient opportunities and spaces for exercise. As the car-borne society becomes ever more the norm (in 1978 private car ownership in China didn’t even exist) the rise in obesity amongst children and young people worldwide and the prevalence of air pollution in significant part caused by vehicle emissions – again think smog in Chinese cities; but think too of the poor air quality in Britain’s cities – are all markers of a deteriorating environment for children who live in cities. These trends don’t help older people either. Wright et al cite external spaces with the highest levels of outdoor play as being those with the highest levels of use by adults too. As they put it ‘we can look beyond the basic design function to build playfulness and freedom to explore into everyday journeys.’ (6) They see some positive signs in cities as diverse as Tirana, Utrecht and Bogota, where children are actively encouraged as agents of change whether that be through children’s councils, or through mechanisms to engage in the design and delivery of new parks and play spaces.

Colin Ward was an anarchist who saw social change emerging from expanding social co-operation and mutual aid in everyday life. The work he did with the TCPA’s Education Unit exemplified in this most important work of his was, as Ken Worpole put in an obituary in 2010, ‘to get children out of school and into their communities, to talk to local people and to explore their neighbourhood its amenities and utilities and understand how building streets, landscapes, and social life interact. This led to Colin’s focus on the unique world of childhood which in the end may prove to have been his – and anarchism’s – most enduring contribution to social policy.’(7) Forty years on, The Child in the City is a book worth celebrating. It is also one to re-read to reflect on just how far we still have to travel ‘to make cities more fruitful and enjoyable for both the child and the city’.

This article first appeared in the July 2018 issue of Town & Country Planning.