Theaster Gates: transforming Chicago’s south side one vacant building at a time

Not many urban planning graduates get to have a solo exhibition at the Tate. But Theaster Gates is no ordinary urban planning graduate. For a start he has two planning degrees. Performance artist, ceramicist, urban regenerator, Theaster Gates‘s first solo exhibition in the UK, Amalgam, opened at Tate Liverpool in December, running till May 2020 (1). For those not familiar with him and his work it’s worth a brief re-cap. Born in Chicago in 1973 to a roofer father and school teacher mother, the youngest of nine, he has lived almost his whole life in the city, where he is now Professor of Arts and Public Life at the University of Chicago and Director of Place Lab in its Harris School of Public Policy.  If that sounds a little on the conventionally academic side nothing could be further from the truth. Gates first sprung to prominence in 2007 when having studied ceramics in Japan for some years having graduated in urban planning and ceramics in 1996, he returned to Chicago, only to discover that American ceramics collectors weren’t interested in a black ceramicists work.

After ten years of struggling to sell under his own name Gates created the fictional character Shoji Yamaguchi. According to the story, Yamaguchi arrived in the USA after WW11, settled in Mississippi, married a local black woman who was a civil rights activist and they were both conveniently/tragically killed in a road accident in 1991. Gates acquired Yamaguchi’s body of work and put it up for sale in a conceptual exhibition at the Hyde Park Arts Centre that included a full blown dining experience and a guest appearance by Yamaguchi’s son, played by a young mixed-race artist, who spoke movingly to the diners about how much his father would have loved to have been there. The ceramics, highly priced because ceramics by Japanese makers are the thing to collect, promptly sold out.  Gates had made his name as an artist, arguably in a rather roundabout way and proceeded to use his fame/notoriety (the purchaser weren’t unhappy with their purchases especially when he suddenly sprung to fame) to focus on  his much larger project, the regeneration of whole neighbourhoods in the South Side of Chicago  through arts and culture (2).

Backbone of his ‘redemptive architecture’ approach is the Rebuild Foundation (3). Based in Chicago’s Grand Crossings neighbourhood it is a non-profit organization focussing on cultural driven redevelopment and affordable space initiatives. Its purpose is essentially to create ways for existing residents to feel that culture can thrive where they live, ie not gentrification and the displacement of existing communities by better-off incomers. First up was the Dorchester Projects which involved the purchase and renovation of two large houses on Dorchester Avenue, one of which the Archive House holds 14,000 architecture books acquired from a closed bookshop. The other the Listening House holds 8,000 records purchased at the closure of Dr Wax Records. Linked to these are the Dorchester Art + Housing collaborative and the Black Cinema House. Crowning glory was Gates’s purchase of the Prohibition Era, Stony Island Savings Bank, long abandoned and with several feet of water flooding its basement vaults. Now it is the Stony island Arts Bank and contains the book collection of John H Johnson founder of Ebony and Jet magazines, the record collection of Frankie Knuckles the godfather of house music, and a series of other black arts-related initiatives.

The projects have had a transformative effect on the locality and continue to be funded through  arts-related initiatives ranging from the sale of lengths of fire-hose rescued from the Bank and materials from the houses such as planks, window frames and rafters  surplus to the renovated houses, re-purposed by Gates as art works. None of them are cheap but purchasers know that the money goes to important regeneration work in poorer neighbourhoods.  These ideas are now being replicated by Gates into neighbouring cities in the mid-west including Gary, Akron and Detroit.

The re-purposing of building materials is something of a theme, and Gates’s first foray into the UK was an installation called ‘Sanctum’ in Temple church in Bristol in 2015 (4). 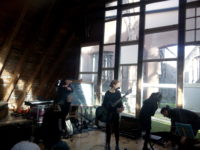 The church itself is a ruin – the victim of the first night of the Nazi blitz on Bristol in November 1940, symbolically never rebuilt and rarely open to the public. Gates ‘s installation in the nave was made entirely of  recycled  building materials mainly from the  local disused molasses and chocolate factories, and their unstated connection with slave trade, and the space created was used as a new performance space which ran 24 hours a day for 24 days, hosting live musicians, dancers, singers and poets. No programme; just turn up and enjoy. (See by blog on the ‘Sanctum’ event here)

In the Tate Liverpool exhibition, Gates develops the ideas he has been working on for the past couple of decades in this case documenting and interpreting the history of Malaga, a small island off the coast of Maine, USA. During the 19 Century the island had been the home to an ethnically-mixed community, but in 1912 on the orders of the State Governor, the island’s inhabitants were forcibly removed to the mainland, where they were offered no housing, job or support. Through sculpture, installation, film, and dance, ‘Amalgam’ responds to this history, exploring the complex and interweaving issues of race, territory and inequality in the USA which Gates has become so closely associated with through his socially engaged practice both as an urbanist and as an artist. It is the kind of work that will inspire anyone who understands that the work of urban planners can be transformative, if only one vacant building at a time.