It is a year since I took up my  post as Chair of Garden Organic, and this week was the first time I had to preside over an AGM.  It sounds like it could be the most tedious aspect of the entire role, but far from it.  The event is something Garden Organic has always taken seriously – after all it is a membership organization and its Trustees are elected by and from  the membership. So inviting them along and giving them a good time (as well as telling them about the grisly details of the finances) goes with the territory. And the ‘territory’ this year? Doddington Hall just outside Lincoln. It is a grand Elizabethan pile built in 1595, still in private ownership, with a set of facilities ideal for a gathering of organic gardeners. Apart from a conference hall  suitable for 120+, approximately the number of members who came along, an excellent cafe (and the inevitable retail therapy opportunities which along the predictable  ‘farm shop’ and ‘country clothing’ outlet, included a bike shop)  it has a delightful garden (only open to the public twice a week during the summer months, but available to peer into through wrought iron gates at other times) and a two acre walled Victorian kitchen garden. 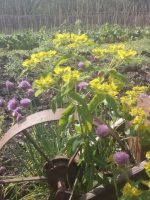 More on that later. The assembled members were entertained by Garden Organic’s CEO James Campbell clad in a vivid lime green jacket, President Prof Tim Lang, whose ‘Unfolding agenda for Garden Organic’ ranged  widely across everything from the risks of using fossil fuel-based  fertilisers in a world where fossil fuels are increasingly scarce, to our ability to actually harvest the food we grow post Brexit, if the migrant labour isn’t there to do it. Commenting that we have an opportunity to unleash a rethinking of the food system, he urged us to ‘love the present crisis.’ And finally, Chris Collins, Head of Organic Horticulture, and former BBC ‘Blue Peter’ gardener, whose talk on Food Growing Schools in London project was by turns inspiring, laughter inducing and a dose of sheer common sense.

But in a way this was all a prelude to the garden tour. What a treat it was being taken round by the head Kitchen Gardener, James Mellors 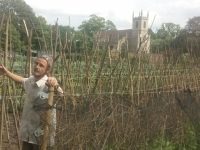 (a wonderfully Lawrentian stately home-ish name). The garden itself was only restored  from desolation a decade ago, thanks to a Heritage Lottery Fund grant and the expert input of the ‘Lost Gardens of Heligan’ team. Now a team of five gardeners – deployed across the whole estate, has turned it into an organic marvel. Top fruit and soft fruit trained up the walls, including gooseberries climbing to six feet, asparagus beds like I’ve never managed – the secret seems to be the sandy soil – not clay like mine, a line of runner bean poles that is so huge it looks more like a Civil War stockade,  quantities of broad beans whose pinched-out tops we were told were in the salads in the cafe that day, and parsnips that Chris Collins admired while confessing that ‘buttered parsnips’ were his favourite vegetable.

And this was to say nothing of the magnificent greenhouse with the merlot grapes and lemon tree, the biggest cold frame I have ever seen, 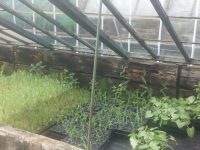 and a set of compost bins, the heart of any organic garden of course, which our CEO James Campbell described as being ‘the size of my garden’ – well, certainly big enough to park an SUV in – indeed one did have an SUV parked in it! 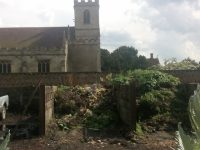 Said bins were located remarkably close to the church, but if you have your own church in the grounds I guess you can put whatever you like next to it.

To round off the day an ‘organic gardeners question time’ panel (not including me, I’m not expert enough) fielded questions from a highly informed audience. Questions like ‘What should I do with dandelions on an acre of lawn?’ The questioner was clearly angling for some kind of organic ‘magic bullet’ as an alternative to spraying them, but of course the panel took a completely different approach, suggesting that the obvious answer is to leave them there; as a supply of leaves for hens (I can confirm  their love of them) or tortoises,  for salad (of course), and the flowers for the bees and as the basis for dandelion wine. And dammit, just because they are pretty. With advice like that dispensed with such authority and good humour, who could argue with James Campbell’s (still in ‘that jacket’) concluding remark that Garden Organic membership at ‘less than the cost of a pint per month’ was a refreshment to savour.