American artist Theaster Gates sprung to peoples notice with his work  on urban regeneration-meets-art projects on Chicago’s South Side. Since then he’s worked in Istanbul and Kassel, Germany amongst other places. In November he staged ‘Sanctum’ in a ruined church in Bristol. The Temple Church has been left unrestored since it was destroyed in the Blitz in November 1940.

In ‘Sanctum’, Gates created a performance space inside the shell of the church, a space that hosted 24 days of music, song, and spoken word, 24 hours a day. And what a space it is. Built from salvaged beams, old bricks, 18c floor planks and old doors and windows; it is part Hobbit home, part inverted wooden ship and part gigantic allotment shed. 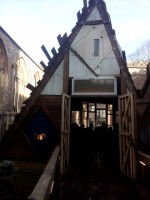 Lord and Lady Muck and friends got to visit on the afternoon of the final day. A beautiful, sunny, and cold day. 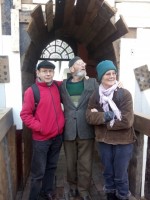 The church itself, hardly ever open to the public – some of the structure isn’t safe, is a bleak reminder of the horrors of war visited upon a city that suffered more than its fair share of bombing 75 years ago.

Inside, Gates has created something both provisional and eternal, turning dead space into something alive. Alive that is with the continuous performances. It is all a bit chaotic – as it should be. Admission is free so just turning up and queuing is how it works – probably not much of a queue at 5am on a weekday morning, but what unexpected joy might there be then?  A harpist perhaps or a singer. Turning up at any time it could be a ‘famous name’, (Mercury Prize nominees Slaves appeared at one point) or more likely a mash up of Bristol bands and singers, poets, speakers, or performers. You can stay for an hour, and groups are admitted at 20 minute intervals at busy times, leading to a sense of the sea, as a gentle tide of people  empty and fill the space as their time-slots commence or expire.  The space is small, welcoming and flexible. Bristol-based singer Julia Turner was on to  entertain the Muck party, with her fellow performer violinist Annalise Lam. 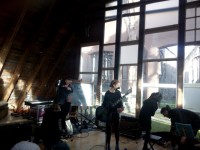 ‘Girl with a trumpet’ was one of their star turns (you can check out the actual performance on You Tube)  and they performed a couple of Bill Withers numbers too (as in, ‘how do you turn in a duck into a great blues musician?’ ‘You put it in the microwave till its bill withers’) but the one that touched our hearts was  ‘My Victorian boy friend’.

Meantime children played on the wooden structures that cover the stones that mark the remains of the original 12c Knights Templar church and we gazed in awe at the quality of the workmanship that went into the  construction of this supposedly temporary venue. 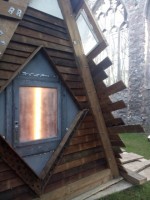 A temple to allotment sheds world wide, right there in the Temple Church.