I’ve had a pond in my garden for a good twenty years. When the children were small the space had a thick concrete cap on it, reputedly the  base of a war-time Anderson shelter.  It served the very useful purpose of hosting a children’s sandpit without them getting hopelessly muddy. But children grow up and the sandpit was no longer a necessary part of the garden. But a pond seemed like a good idea. While having some other work done on the house the builders broke up the concrete and dug a pond. Its been a good one and the frogs have enjoyed it a lot, spawning every year. But that Anderson shelter was where it was because there was plenty of earth – an earth bank at the end of the garden; and over the years the earth has gradually slithered into the pond. Pond and steep bank were incompatible, so as part of my garden makeover this year I resolved to move it. Second week in October was pencilled in as the time to do it – at a time when the frogs were neither so small as to be unable to make their escape nor  hibernating at the bottom to escape the cold of winter, but rather roaming the garden and sheltering in damp places like the compost heap, while feeding on slugs and other garden pests.

Pond moving requires quite a lot of digging, so in the end I decided to shift it out of the line of fire of that collapsing bank, but not to relocate it entirely. 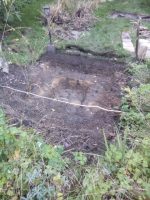 After all it wouldn’t do if the frogs lost their bearings. So come mid-October and I’m processing the very recent death of my mum and pond renovation seems as good a way as any to do it.

Its quite a palaver. Emptying the pond of weed, mud and all that earth and stone that shouldn’t be in it; digging out the new pond profile; replacing the lining and the linings protection; 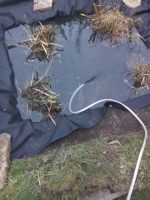 securing it with stone and sod; refilling it and finally returning some pond plants. 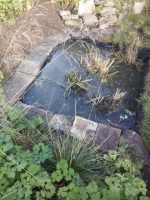 Now, stand back be patient and  await the frogs return.