I have seen the future, and it chirps

To misquote American radical journalist  Lincoln Steffens’ famous aphorism after his visit to the Soviet Union in 1919 (he later recanted). Last year when writing my Cowley Road Cookbook I forecast that the next big global trend to hit the Cowley Road food scene would be insects. Two billion people  world wide are eating insects  as part of their normal diet already, and I speculated that the arrival of entomophagy on Cowley Road couldn’t be far away. And sure enough Science Oxford hosted a bug banquet at the Pegasus Theatre over the weekend. Two in fact. Some twenty two people paid to come along, about half were children. Quick quiz. Who had eaten insects before? Only two hands went up, mine being one. Where? ‘In China.’ we both said.

And off we went. Starting with a short video from the BBC’s Living Planet series on children catching and eating tarantulas in the an unspecified jungle location. The size of dinner plates  they say. Cook them over an open fire until all the dangerous hairs are burnt off and ‘they taste like crab’ – apparently. Back at the Pegasus nothing so ambitious. Actual cooking was out for a start, but we were served up with a kind of ‘tasting menu’ of  little creatures; mealworms, 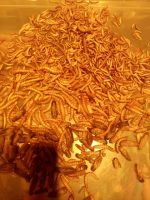 (see picture) grasshoppers, ants, silkworm pupae, crickets and locusts. To be honest the mealworms taste like pringles; the crickets are better, a sort of coconut chip flavour, and the locusts are by far the most interesting; slightly fishy, crunchy, but the wings are a bit chewy. Yes that’s me eating one. 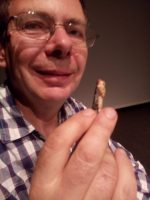 Being mainly aimed at children, presumably on the ‘get ’em young’ principle, the next  part of the event was so so British it couldn’t be parodied. Cooking in a theatre? Never. ‘Elf and safety of course, but  the Science Oxford team produced a tealight, some rubbers to balance it on and a little stand to to put your aluminum cupcake on for each table of excited adults and children, and it was the opportunity to melt some chocolate, throw in some dried berries/meringue pieces/candied cherries and your insects of choice.  Locust dipped in chocolate anyone? It worked for some.

To round off was the ‘something I prepared earlier’, slot. Bug baking in all its glory. We got to sample huge platters full of banana bread …with added mealworms, chocolate truffles … with grasshopper, white chocolate fudge and ants, and my favourite, ‘chocolate chirp cookie’ with cricket.

All very sweet, in both senses of the word. Next time something a little more spicy with a beer, like these ones in Beijing, perhaps.