As the political class digest the implications of Jeremy Corbyn’s landslide win in the Labour leadership elections it seems appropriate to remind ourselves of  the importance of his allotment in his political trajectory. Throughout the  leadership election campaign Lord Muck was reminded of our similarities: ‘..but Martin he rides a bike, makes jam, and has his own allotment!’ What is this supposed to tell us? That Lord Muck should lead the Labour Party? No thanks. 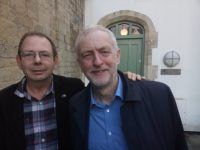 Instead  let us turn to the real story. Jeremy Corbyn’s allotment. The media has made a few passing and often dismissive references to the allotment – mostly of the ‘well he can always retire to his allotment if he loses’-type comments. He didn’t lose, so now the allotment assumes a much greater political salience. Of course we have been there before – in fiction. Remember Chance, the Peter Sellers figure in the film ‘Being there’? The humble gardener who who determines Presidential policy in the White House, on the basis of his observations about the weather and the seasons. Now we have the chance to watch nature imitate art.

But back to that allotment. Where is it ? In East Finchley, north London. How long has he  had one? About twelve years;  to be precise since March 2003. Apparently his name came up on the waiting list a week or so before the invasion of Iraq – so that spring planting and digging season got missed. Most important, what does he grow? According to an interview in The Independent on 9 August – the only interview to take his interest in allotments seriously, this year he is growing potatoes, beans, soft fruit and apples. Good choice. Its been a great year for all of them. The Indy quotes his gardening style thus: ‘I try to grow things that don’t require a lot of watering because I don’t get  up there regularly enough. But I always make time for my allotment. You like a dry summer because the weeds don’t grow. You water what you need to water and the weeds can sod off.’  For  a busy gardener its a technique that works – most of the time – as long as you don’t want to grow anything like lettuces. But then he is clear he doesn’t. How has it influenced his policy positions? This still remains to be seen but he has argues that Labour should build houses with gardens for everyone  so that ‘anyone who wants to be a beekeeper should be a beekeeper’ (his environment policy is strong on protecting bees). I don’t recall that as being the wellspring of previous Labour housing policy. And the jam? In an interview in the ‘Sunday People’ he refers to making ‘apple and blackcurrant jam’. Figures; he has already told us about the apples and soft fruit.

What I want to know though is; does he grow roses?  We all need bread (or potatoes) but we all need roses too. Jeremy will be well aware of the famous bread and roses strike by women textile workers in Lawrence, Mass in 1912, orchestrated by the Industrial Workers of the World (the ‘Wobblies’). Like him, they won. Rose Schneiderman’s  refrain was; ‘The worker must have bread, but she must have roses too.’ and it led to the song  whose second verse goes;

‘As we come marching, marching, we battle too for men

For they are women’s children and we mother them again,

Our lives shall not be sweated from birth until life closes;

Hearts starve as well as bodies; give us bread, but give us roses!’

So come on allotment holders of the world, Unite! Demand the impossible of Jeremy. More roses!