I have just spent a glorious week at Brantwood overlooking Coniston in the Lake District  on my first ever writers retreat with Writers in Oxford.  Brantwood was the home of John Ruskin (1819-1900) a giant of the Victorian era, artist, (the first Slade Professor of Fine Art at Oxford) radical social reformer (‘Unto this Last’, ‘Fors Clavigera’, ‘Crown of Wild Olives’ and much else), and architectural critic. His house reflects the man. Our group was  appropriately, lodged in The Lodge, the main house being open to visitors. An absolutely delightful cafe was practically next door, so with views like this from my room,

writing was a pleasure.

When released from his desk Lord Muck could explore the 250 acres of grounds, wander down to the lake, or even go hiking in the hills. The call of the creative impulse meant that hiking only happened once. But every day there was a need to relax, collect thoughts and get some perspective, and the gardens were an ideal setting.  Gardens in November are never at their most exciting, though a couple of nights of hard frosts and utterly still mornings  produced a landscape that positively glittered in the early morning sun.

But Ruskin was not known as a creative genius for nothing. Gardens were definitely his ‘thing’,  with a mountain garden, a moorland garden, the Fern Garden, the Professor’s Garden, a Lower Garden (by the lake) including a medicinal garden, and most remarkable of all what is known as the ‘Zig-Zaggy’.  Rescued from  a century of neglect about 15 years ago the over grown hillside has been carefully reconstructed as the ‘Paradise of Terraces’ Ruskin originally intended. 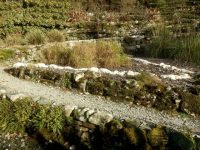 Originally constructed to introduce terracing  into English Mountain cultivation, Ruskin had ambitions for a garden that was, to put it mildly, wildly different from the conventional run of Victorian landscapes.  In the  Zig-Zaggy, Ruskin  created a garden that reflected the Purgatorial Mount in Dante’s ‘Divine Comedy’.  And what might that look like? Now it has been reconstructed, it takes the form of  an allegory of the Seven Deadly Sins. Entering from the bottom the 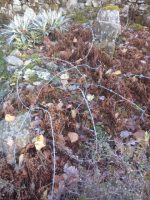 visitor  climbs the terraces passing as they do envy (with barbed wire as part of the planting scheme), 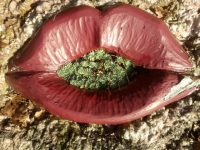 pride, sloth, anger, gluttony and avarice,  topping it off with lust.  It is certainly an interesting idea, though whether it works is perhaps difficult to be sure in November when the luxuriant planting has wilted  in the autumn frosts. Love in a cold climate perhaps. But lust? Perhaps best left for a sultry summer afternoon.