My hens: honouring their passing

I killed my hens a few days ago. I’m not in the habit of doing this; 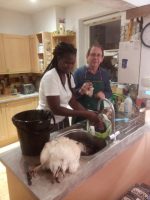 I’m very fond of hens and have been keeping them for getting on for 20 years (and indeed kept them as a child), but if you look after them properly they grow old and stop laying eggs. Actually that isn’t quite true. The first hens I had were Warrens the breed created for the intensive laying industry. They are pretty easy to obtain and they are bred to lay and lay and lay for a couple of years and then die. That’s the economic model of the industry. Why pay for the feed and housing of hens that don’t lay? Being new to the game I didn’t know this when I got them. When they predictably, died, I got some pure breeds, a White Sussex a Barred Plymouth Rock and a Rhode Island Red from memory. They were lovely and lived to a great age, ten,  not laying an egg between them for about the last two years of their lives and only about 50-60 a year for a couple of years before that. Actually  they might well have lived a while longer, but they made the ultimate sacrifice and  final contribution to the household economy and after I’d killed them they ended up in the pot. So most recently in 2012 I set off again to the Domestic Fowl Trust  then still based outside Pershore  for three more. These  were  crosses of various kinds including a Speckeldy,  some kind of Plymouth Rock cross and  some kind of Sussex. Six years later the time came round again for the killing spree. No eggs laid since about September and no sign despite the lengthening days, of any more to come. Two more (the third one died about three years ago after being severely frightened by a fox) to add to the statistics – which in the UK alone is in excess of 600 million hens a year slaughtered – yes really. That statistic kind of summarises my position on this.  As a vegetarian for the past almost 40 years I’d be a lot a happier about meat eating if people slaughtered it themselves (road kill allowed). I think that might reduce meat consumption quite a bit, helping both the planet and peoples wallets and  carbon footprint. To say nothing of animal welfare. But I digress.

My friend Premier came round to help. She was originally from Zimbabwe and learned to slaughter, pluck, gut and joint chickens  from  the age of ten. So she knew what to do. We killed one each. Pretty quick, pretty easy, but her method was more elegant. 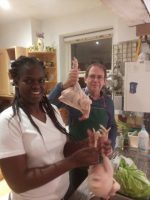 My experience is just once every 5-6 years. Mind you the phrase ‘headless chicken’ hasn’t passed into the language for no reason. They really do flap around, and if you gave them the chance, run about for a good minute or so. Stone dead, but looking alarmingly alive. Prepping them up for the pot was an eye opener – I’ve always avoided this part of the process in the past. Plucking is made much easier by pouring very hot water over them – the feathers come out real easy then (actually I knew this part as  I’d read about it in novels like Edna O’Brien’s ‘The country girls’ – life in the west of Ireland in the 1950’s). Gutting them is a real skill; I wasn’t going anywhere near this part, definitely not ‘Blue Peter’ try-this-one-at-home style. Premier managed to extract all the offal and separated it away for consumption; heart, liver, kidney, gizzard, the lot, with of course the sole exception of the gall bladder which she carefully cut out – bursting that and you spoil the lot. Then to the jointing. Even here nothing is lost. The legs are descaled, and the feet are removed and kept – presumably for soup, there isn’t anything else on them. Ditto the head.  Bones are broken and legs, wings and rib cage are reduced to manageable sizes. 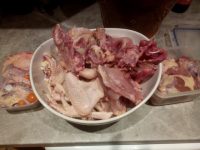 Thirty minutes or so later there was 2.5kg of edible (in one form or another) chicken  from each bird and waste amounting to half a cup full from the pair of them. Now that is the way to honour their lives. Thank you dear hens; you were great company, an ornament in the garden, delightfully productive in your lives,  and equally so in your deaths. May your souls soar and when I come to eat you I will raise a glass to your memory.