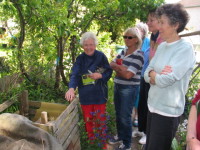 A Sunday afternoon in Headington, Oxford  at the invitation of Low Carbon Headington’s garden group to discuss composting and generally trouble-shoot. Ten eager composters and plenty of  informed questions. Debates around the relative advantages of ‘daleks’, rotating bins and the wooden slatted variety. Host Cathy came up trumps by having examples of all three in use in her garden as well as a leaf-mould  bin made from wire netting. Most surprising question? The use of seaweed in compost. Well yes it has its place as organic material, but lets face it Oxford is about as far as you can get from the sea in the UK or does this low carbon group know something about global warming and  imminent sea level rises that the rest of us don’t? A tour of Cathy’s  great selection of composting technologies was rounded off with tea and home-made cakes – none containing carrageen. 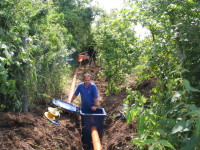 A day in Sheffield visiting the Whirlow Hall City Farm  on behalf of the Barracks Lane Community Garden, along with fellow trustee Debbie. Barracks Lane is quite tiny (about 100 x 200 metres on  the site of some old council garages in Cowley) and a day at Whirlow reinforced that sense. High up on the moors on the edge of the city it covers 138 acres  is a working farm with pigs, sheep , cows and chickens, an extensive educational programme  and everything from outdoor horticulture to hydroponic strawberries, an orchard and vineyard. Perfect weather gave the place an almost  holiday feel an the excitement of coachloads of local school children heightened that sense. After lunch in the cafe  we got taken up the hill behind the farm house to see the vineyard. Planted in 2011 there are 2,900 vines and at 850 ft,  it is the highest vineyard in England.  Who knows, perhaps the  the steel city is about to become the home of a great British vintage wine?

The great day arrived and the weather didn’t disappoint. In true British style it was leaden grey with drizzle and freezing cold. Nonetheless, fully prepared with brollies and spare woollies (pressed into use) Lord and Lady Muck had a great time at Buckingham Palace on 30 May.  The tea was great  – it should be at a Royal Garden Party – and made all the more delicious by our sheltering in the tea-tent when the heavens opened – mercifully for only about five minutes.

Her Maj appeared on the steps of the Palace at 4pm sharp and the band broke into a rendition of the ‘Bond Girl’ theme. I can report that she was wearing a rose-coloured outfit, including hat.  Lord and Lady Muck were in blue Armani suit and matching Versache tie, and floral silk dress with matching pink cardie and a fascinator to die for.

The garden is advertised as being ‘very much a spring garden’ in the blurb attendees are issued with. On the penultimate day of this Spring hardly anything was out,  just the rhodedendrons and azalias. And the compost? The  ‘tremendous 170 metre long herbaceous border’ certainly had signs of a good treatment. The bins, carefully hidden from view,  have the grass clippings, prunings and leaves gathered in the garden, combined we were told, with ‘some of the horse manure from the adjacent Royal Mews’.  No mention of kitchen waste from the Royal apartments though – but perhaps there isn’t any – the cakes were all gone by 5pm. 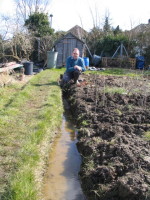 That lady’s got no arms!

I opened my garden to the public today as part of DRARA’s ‘open gardens’ programme in aid of creating a ‘dementia friendly neighbourhood’. Over 50 visitors between 2-6pm in glorious weather. Shame the garden didn’t look more colourful.  Wisteria, clematis montana, ceanothus and camellia were out, plus some apple blossom, but basically that was it. The garden looked pretty – i put quite a bit of work into grass cutting, edging and generally making sure pots etc were filled and the hens were on best behaviour. Several very young visitors were enchanted by them – feeding them melon seeds and cooked rice was a big deal.  Romantic Moderns author Alexandra Harris  was one of the first visitors and admired the  compost and the statuary. Mavis and Colin brought honey – and went away with eggs.  One visitor, peering at the Venus de Milo, said ‘Why has that lady got no arms?’

Its opened! After a lot of preparation and a very long day out at the studio in Charlbury yesterday mounting, framing and hanging the pictures,  Clare Carswell’s and my Artweeks exhibition opened today. It takes a new perspective on my long term photo project on worldwide urban agriculture, looking at growing in confined spaces across the world, including Havana Cuba – rooftop vegetable growing in tyres using soil painstakingly collected from the markets, to a wonderful gent rearranging his pots of honey at an open day at an allotment site in Bristol, as Morris dancers limber up in the background. Clare has added her take on the garden beside her studio and we have combined it with a quirky collection of objects I’ve acquired on my photographic travels, ranging from a pot of honey from New York skyscraper-based bees, to beer from hops grown on an allotment in Oxford. I’ll do the occasional update on audience reaction over the next few weeks.

A tweet from Cultivate, the Oxford-based local food growing and sell-from-veg-van-co-op, a couple of days ago calling for rhubarb:

Now, does anyone have rhubarb in their backgarden going spare?! We’re looking for a hyper-local source. We’ll pay! Call Doireann 07507566137

I get back to them and all of a sudden find that I’m a supplier. From today my allotment rhubarb glut will be put to good use and earn cash too. First delivery was 5kg. Wholesale price £2 per kg. As Mr Mickawber might have said “Result – happiness”.

Organic gardening – the answer to obesity?

The Garden Organic AGM at their magical demonstration organic garden site at Ryton-on-Dunsmore. President, Tim Lang is speaking. His riff is on why public health professionals are getting interested in growing. It’s the rise in the epidemic of non-communicable diseases: obesity, heart disease, cancer.

While 900 million people worldwide are hungry, 1.4 billion are obese. He wants to correct the relationship between people and food to promote health; a cultural issue. And he then goes on to name-check me  for the “slightly quirky, crazy approach” I “pioneered at Warwickshire County Council by introducing the master composting and master gardening programmes.” Flattering, but I didn’t really have quite such vaulting ambition. More a case of reducing waste to landfill as part of our waste management programme.

What was really interesting though was the lady who stood up in the audience and told a story about how she was taking blood pressure tablets and suffering from diabetes until her GP told her to get an allotment three seasons ago. Since then she has lost 5 1/2 stone and no longer takes the tablets. And she looked healthy.

Lord and Lady Muck to visit the Palace

I’m starting this blog and the title is inspired by receiving an invitation to a Garden Party at the Palace, all thick card and gold edging for a date later in the month. It’s for my work with Garden Organic. Composting and all that. ‘We will have to go as Lord and Lady Muck then’ says my partner, from now on, Lady Muck. How right. A blog is born.

Veg growing, composting, organic gardening, allotments, garden writing, garden history with a radical twist. The personalities, the people, the plants, the goss, the weather and the occasional bit of magic thrown in… Now with a comment option. Please feel free.