A few days ago I was sitting in my lovely new garden room having had the French windows open all day with all this warm weather, and was talking on the phone to Lady Muck, when all of a sudden out from under the sofa opposite a pair of tiny, dark, beady eyes appeared. 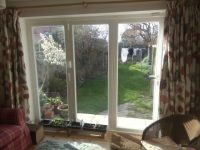 And then another pair. Field mice.  As I talked, these two ran across the room and back under the sofa again, only to re-appear somewhere else like characters from behind the arras in an Elizabethan play. It was only when I’d finished the conversation that I was able to assume my own part in their play – ‘Exeunt, pursued by a bear’. I was charmed, and it brought to mind my encounters with a frog the previous Sunday. I was prepping up to open my garden to the public as part of the Divinity Road Residents Association Open Garden (or more accurately ‘lets be nosy in our neighbours gardens’) scheme. I was advertising mine as  organic, strong on composting, climate resilient, wildlife friendly….that kind of thing; so  moving a bag of grit out of the way of visitors and finding a frog beneath was a very pleasant surprise. Frogs, tadpoles, bumble bees and honey bees, nesting birds (blue tits in the nest box), field mice, squirrels (they appeal to the visitors, but not to me); 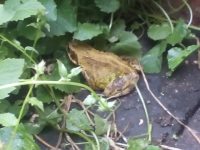 there was some sign of success, though I’m sad to say I haven’t seen or heard,  a hedgehog for about a decade.

The visitors, some 40 over the afternoon, were impressed; several remarked that the garden didn’t feel ‘manicured’ like many others (the wildlife wouldn’t like that and I’m not into ‘outdoor housework’, I struggle enough with the indoor variety). The things they were most impressed with otherwise?  That the garden isn’t flat but has different levels – at least in part a reflection of the fact that its built on a hill, and the arch with clematis and honey suckle growing over it. Coming through the side shed it is the first thing they saw in the garden, and it made more of an impression on them that it generally does on me.  The range and variety of pots and statuary around the hen house impressed too, including the water barrel and guttering system for collecting rainwater off the hen house roof. Of course that is for reasons of hen security as much as for aesthetics; foxes, and there are a few, are definitely one aspect of the local wildlife I do not cherish!