Reflections on a never ending summer

It was 24 deg C yesterday, 10 October. I spent most of the day outdoors walking the north Oxfordshire countryside with friends from the residents association walking group  and getting a tan. Yes really; it was that warm.  We have had hot summers before; everybody who is old enough harks back to 1976 which I remember well as it was the year of my finals.  I spent much of the summer working on building sites,  installing a village sewerage system – and getting a tan into the bargain. But this summer has gone on so long.  And the effects in the garden have been dramatic. Huge cracks in the lawn and garden beds,  fruit trees clearly under stress – I’ve never watered fruit trees to keep them alive before – shrubs and ornamental grasses dying. This despite a good  system of mulching, composting and  rainwater harvesting.  Nevertheless a number of things have thrived in the hot weather, basil for example. I’ve had three crops, and made two batches of pesto one in August, one in September from the same plants.

Twenty five years ago it wasn’t possible to grow basil outdoors successfully. The fig tree has produced dozens and dozens of truly delicious figs as it has done consistently since 2003 – anther pretty hot year as I recall. But this year those wee second crop figs that appear in August and never come to anything before the cold weather sets in, have flourished swelling to a size that if they ripen they will be the first ever second crop – just like in Greece or Italy. Its too early to tell whether they will ripen, but then England isn’t Greece either. Grapes too. My vine isn’t big enough yet to produce a large crop but those it did produce were delicious and my next door neighbours had so many they were handing them out to neighbours and even the builders I had doing some work last week. A cornucopia. 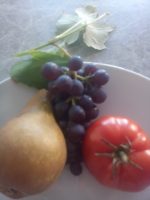 This was also the week when the  UN Intergovernmental Panel on Climate Change issued its latest Report. It makes for gloomy, even alarming reading though the two upsides were that at least all the 195 countries involved signed it off including the USA, and that it stated quite clearly that keeping the Earth’s temperature rise at or below 1.5 deg C from pre-industrial levels was still do-able technically given the political will, though we have only 12 years to achieve it in.  The scale of the ambition set out in the Report is huge, annual  levels of investment in zero carbon infrastructure of all sorts in this country alone that would rival the defence budget ie about £50 bn a year. But yes, its not yet out of reach.

In a way gardeners are the proverbial canary in the coal mine on climate change – or as it is more accurately beginning to be referred to – climate breakdown. What is happening to agriculture world wide is felt right there at your finger tips in the garden; longer growing seasons, more water stress, (or sometimes far too much water), the impact of really burning sun on tender young plants, a sense that the rules and wisdom handed down over generations of when to plant, where and  when to harvest or prune and what to grow, no longer apply, that the advice of oldsters like myself isn’t really all that useful any more.  The impact on  birds, animals and insects,  all pretty crucial in a garden setting (let alone for global biodiversity), particularly an organic one is already very noticeable. Where are those snuffling hedgehogs? The bees? The frogs and toads are still about (thank you for eating those slugs…. ) but for how much longer as drought become more of a feature of central England gardens? Its all a bit predictable.

I remember doing a presentation on climate change in the garden for Science Oxford a decade ago when all these issues were on the horizon, and creating a ‘climate resilient’ garden was seen as a good idea but perhaps not an urgent one. A decade later and we seem to be on the brink  of those changes much more  quickly than I  or anyone else had anticipated.  A 1 deg C  rise in temperature, a point we have already reached, increases the growing season in south east England by three weeks every year. Yes it was a lovely summer, indeed we are probably at that point where the benefits of a warming climate (slightly) outweigh the disadvantages. But if in fifteen years time 2018 will be seen as a ‘cool’ summer with the ‘new normal’ a lot hotter then we all, plants, animals and humans will struggle and while we grapple with the dramatic changes in lifestyle we will need to survive as a species and as a planet, we are sure going to need the shade in our gardens.