Sampling the preserves of the Dalmatian coast

I love to go exploring for interesting  fruit and vegetable growing, and produce markets of all sorts when on holiday. Lord and Lady Muck’s recent visit to the Dalmatian Coast – mostly Croatia but also a little bit of Bosnia (the tragedy of the 1990’s civil war is still raw, but that is another story) included admiring hill side beehives above Makarska (and trying the local honey), exploring narrow valleys amongst the karst limestone mountains and checking out what grows well on the tiny patches carved out of unremitting rock and shored up with intricate terraces and  winding cascades of steps. Olives, cherries, figs, almonds, oranges and lemons  on the more distant terraces; aubergines tomatoes, vines, cabbages and other brassicas nearer to the front door.

So it was with some delight that we came across the ‘ 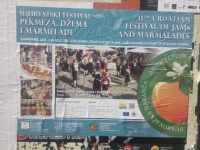 11th Croatian Festival of Jams and Marmalades’ last weekend in Dubrovnik. Its aimed at tourists of course (thought Dubrovnik is a lot quieter by early October) but this doesn’t  preclude some fascinating conversations and opportunities to sample  the stall holders wares. Take Made Jakobusic and her daughter from Petraca, a small village 10 km south of Dubrovnik up in the mountains near the Bosnian border. The family has been farming  in the village for over 200 years. One of their main products  is olive oil. Their groves were seriously damaged in a fire in 1983  and again by invading Serbian forces in the ‘Homeland War’ in 1991, but have since recovered. Though now they have to get the  oil processed in a mill 60 km up the coast at Ston. Its too complicated to pop a few kilometres over the border into Bosnia – Croatia is in the EU, Bosnia isn’t.  Figs are the other main product  with some fifty fig trees. They grow the small blue ones. 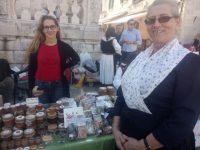 ‘They are designed for drying’ says Made, ‘They have thicker skins that allow the fruit to remain juicy and soft in side when dry. We wash them in seawater and dry them in the open air and the wind of the bora.’ Oranges, lemons and some 30 almond trees complete the picture. As well as olive oil their product range includes fig jam, fig salami and fig cake, dried figs,  orange jam (so-called marmalade), and loads of  items preserved in sugar. 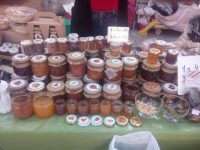 We depart with  sugared almonds, dried figs and candied orange peel in our bag.

The previous week, exploring the mountains above Makarska, we luxuriated in the autumnal bounty, admiring the terraces  almost toppling over with vines, figs, cherries, walnuts and olives tended by their elderly but very fit owners. ‘When I retire I’d like to do something like that’ say I to Lady Muck, ‘But you are retired she says’ (some hope!). And anyway I reflect, I already have vines, cherries, figs and walnuts in garden or allotment. So all I need now is an olive tree.