January is the time of year to draw in the horns on the garden front and enjoy poring over seed catalogues, in front of the fire. First things first. Find the box containing all of last years seeds whether packets, or little ‘dinner money’ envelopes containing saved seed. Sort through them and decide which reluctantly need to be chucked. ‘Sow by August 2009’ in small type on the back  is usually a pretty reliable indicator. So is scrawly handwriting saying ‘pumpkin seed, 2012’ barely readable for the way that slugs have unaccountably crawled all over it and chewed patterns worthy of Jackson Pollock on the packet. Sort through the saveable and the unsaveable; rule of thumb is that anything up to  a year out of date is OK. 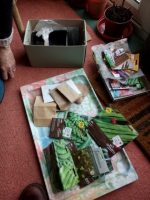 Older than that is generally a risk not worth taking. Lady Muck has a rather more generous (optimistic?) approach.

Now its time to think about what is to get sown this year; bearing in mind variables like available space, any awkwardly-timed holidays, or successes or disasters of last year that may or may not bear repeating. And then there is the furtleing through the seed packets from last year in the sacred box. An approach probably not unlike that of medieval monks deciding each year which ‘sacred relics’ to to bring out and promote this year to bring the in the pilgrims. ‘Splinter from the True Cross this year guys?  Lock of St Aquinas’s hair? Oh my God were running a bit low on original bones from the two fishes, better send an order down to the refectory for a re-stock.’ Nothing changes. Only these days  having got the list of required seeds, corms, and tubers for the year sorted, its off to the garden centre rather than a bit of grave robbing in the crypt.

The annual winter ordering seeds from a catalogue is a ritual I have conducted for decades. But as the total area I cultivate has gradually shrunk – fewer mouths to feed and all that, (definitely not the five thousand) the need for dozens of tubers as sent out through the catalogues, has become an expensive and wasteful way to order. So a visit to a local garden shop seems a better bet. Buy what you need. Being in Bristol for a few days and accompanied by Lady Muck we head out to the Henleaze Garden Shop, a veritable emporium of all things  to grow, or already growing.  A range of potato varieties to die for; and if you want, you can buy just one tuber. In the end we select five, Charlotte, Desiree, Duke of York, Pink Fir Apple and Picasso (eat your heart out Jackson Pollock). The onion sets are equally tempting, Sturon, Stuttgart, Red Baron and a punt with some shallots I don’t know – Yellow Moon. 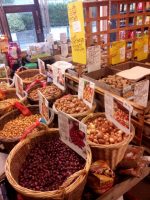 All are carefully counted into bags, just a few  of each – such a contrast from the bags of 100+ that came through the post and were mostly wasted. And now to the seeds, and all that hard work in the seed box pays off. The list is relatively short, both a reflection of the smaller growing space these days (a patch in the garden rather grandly known as the potager, a 6ft by 6 ft share of a communal poly tunnel on the allotment, and  one large and four small beds amongst the fruit trees on the orchard allotment) and the saved seed supply from last year. There are some stalwarts needed, spinach, lettuce, french beans, beetroot, parsnips, leeks and tomatoes (but plenty of others like cabbage, courgette, broad beans and runner beans  are not, as good stocks of last years seed remain) as well as  the slightly more exotic like sweet Romano peppers for the poly tunnel. Tomatoes are one of those crops where planting several varieties and in different places; garden, poly tunnel, allotment, greatly reduces the chances of the whole crop getting blight. Packets of seeds are ‘harvested’ and  placed with those tubers  in the basket.

When its time to pay we discover the proprietor is trained in horticulture. He saves his own seed and sells the heritage varieties in plugs to get around the regulations on the sale of uncertified seed, and is enjoying running a family business that has been operating for over 70 years. A little snippet of gossip on what is going on at Jekka’s Seeds ensues. So much more fun than ordering from a catalogue. Job done. Home to divide up the packets of seed with far too many in them  for most people’s purposes – 500 parsnip seeds anyone? Now its time to start planting …. well, soon.