It rained last night. That wouldn’t sound like such an amazing statement in the normal course of events in England. But its been dry, very dry, for a couple of months. It has rained occasionally, but April’s rainfall in southern England has been no more than 20% of normal and that has itself followed an unusually dry winter. Though not a cold winter – no snow at all this year, there were enough consistent and hard frosts in December and January to see off garden pests that thrive in warm winters – hopefully. 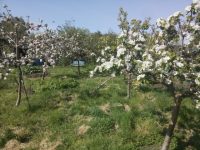 From my perspective the only consolation about this dry weather has been that at this time of the year evaporation levels are relatively low – the water in the soil by and large stays there. Helped of course by plenty of compost, muck and mulch. Thank you chickens, thank you compost heap. It has also been rather cold. Some sunny days, but chilly quite a lot of the time. Drought doesn’t necessarily mean hot sunshine. 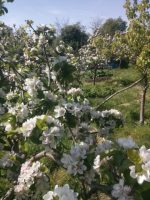 But on a more positive note what an impact this has had on spring blossom. Several weeks of sunny, still and dry weather brought the blossom out – rather alarmingly early perhaps, and then temperatures plunged, the weather stayed calm, and the blossom  bloomed and stayed blooming. Doesn’t the allotment look beautiful! Apart from a few late blossoming apple varieties, it has mainly gone over now, but the fruit crop has set – thank you bees – and assuming we now get some decent rain we could be in for a bumper fruit crop this year. Updates  through the season.