Its been a weekend for harvesting soft fruit and  variously freezing it, making jam  – oh joy some gooseberry jam is now safely stowed in the cellar after several years of eking out a very limited supply; daughter Nadine and I share a particular delight in homemade gooseberry jam.  And making summer pudding. Well Wimbledon does start today and its so much nicer than strawberries, with cream. Ah, summer pudding making. A very long tradition in the Muck household. When children were small and time tight, getting it all made before the fruit went off in the heat, and the pressures of school nights – home work supervision, PE kit assembly and the like, meant cutting corners. In a nice way of course. One of these – most obvious when the puddings came out of the freezer some autumn evening, was the presence of what came to be known as ‘fruit bones’. 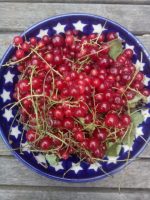 Yes the sheer joyful laziness of chucking the redcurrants into the boiling mixture still on their stalks, rather than faffing around laboriously picking off each tiny berry. The compromises of parent hood. The don’t improve a summer pudding, but like small bones in a fish, they go with the territory. You can pick them out, choose to eat them, or a bit of both. Just like fish bones. Hence the name – invented here. I know its not Robert Macfarlane’s shtick, but when he’s finished his successor book to ‘Landmarks’, maybe he will turn his attention to those quirky words for  culinary activities. ‘Fruit bones’ will surely be ripe for inclusion.