One of the reasons I like plants so much is that they don’t move. They might sway in the wind,  spread across paving, or clamber up trellises, but you know where to find them. With reasonable eyesight you can spot even the smallest ones and take your time identifying them or appreciating them as the spirit moves you. The same can’t be said of birds, and that is why I’m not a ‘birder’. They do annoying things like perch high up in inaccessible trees, on telegraph lines, or in bushes. They even hide in their nests or the bird box I so thoughtfully provide in the crab apple tree. Worse still if you approach them they often fly away. When did a plant last do that? But this doesn’t mean I don’t appreciate birds. A murmuration of starlings is one of the wonders of the natural world. Robins have  sweet personalities and  are great company for an afternoons digging.  The sight of a raptor, especially a large on like a red kite, gliding on the thermals of a warm day effortlessly scanning the ground for prey (or abandoned kebabs if in a city) is a thing of beauty. Blue tits, swallows or blackbirds nesting are a delight, and not so unusual. But my identification skills either by sight or call are pretty poor. I’m an expert at a dozen – seagull, rook, owl – either you know where to look – rookery, seashore, landfill site; or their call – ‘de-wit de-woo’ is distinctive enough not to be mistaken for something else.

So it has been with great joy that over the past few weeks I have been able to extend my range of recognisable garden birds. To my considerable amazement an unknown to me, bird of some size has been a regular visitor to the garden. I’ve enjoyed being able to watch it from the window of my study, strutting over the grass and taking the occasional peck at the ground – worm? insect? remains of Snicker Bar buried by a squirrel? Trying to photograph this lovely visitor proved too big a challenge – too far away, no suitable lens and a tendency for the thing to fly away when approached – did I mention that? But I did have time for a good look and a consult of my ‘Complete Garden Bird Book’. And the big reveal? Its a Green Woodpecker. 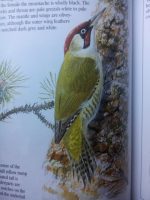 Not so rare, ‘a large sturdy woodpecker found throughout most of Europe’ is how its range is described, but new to my garden for sure. Its nice to know it thinks my garden is sufficiently wooded to be an attractive habitat, and according to the book it is probably after ants when poking its long beak into my lawn. Some day soon at this rate I will be able to identify two dozen birds. Will that make me a ‘birder’ after all?