Camping in an Elderflower orchard 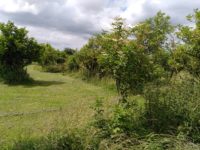 Lord and Lady Muck enjoyed a rather wet camping trip in the Cotswolds near Stroud earlier in the month. The exact location, Thistledown, on the edge of Woodchester Park, is a charming campsite but also an unusual one. The campsite we were informed is on a site where the only Bronze Age storage pit in southern England has been found, along with several Bronze Age roundhouses. It is also the site of  a  ‘farm, [that] used to contain the largest elderflower orchard in the world!’  and that those  ‘.. flowers were used to make soft drinks’.  The remains of this orchard still exist, and are a location for those campers who either don’t want to stray too far from their cars, or are staying in camper vans. The rest of us have a longer walk down a steep path to the other pitches, which of course are more secluded and car-free. Now Lord and Lady Muck are no slouches at making elderflower wine or cordial, or indeed elderberry wine, but these are harvested from hedgerow trees or trees (bushes?)  on our allotments. Production at scale is clearly still undertaken, hence the various commercial elderflower cordials and presse’s, and the re-purposed orchard prompted reflection on the origins of the commercial aspects of  elder production.

In fact the Elder (Sambucus nigra) is a mysterious and magical tree native to the British Isles and the name is derived from the Anglo Saxon  ‘aeld’  which means ‘fire’, perhaps because the branches hollowed out of their pith were used like bellows for blowing on fire.  Elder has long been sacred to an ancient godess of vegetation and is believed to be inhabited by a tree dryad which represents the soul of the tree.

This explains why Elder were often planted close to houses and farms, in the belief that if treated well and honoured, the dryad would protect the house and its occupants against evil spirits. So it is unsurprising that there was a widespread taboo against cutting down or burning its wood, and by the 17C almost every part of the tree was considered medicinaly effective in treating  ailments ranging from toothache to the plague. Muck’s 1597 edition of Gerard’s Herbal lists numerous uses and remedies for multiple ailments. So, (I’m updating the English here) ‘The green leaves pounded with deers suet or bulls tallow are good to be laid to hot swellings and tumours, and do assuage the pain of gout.’ Slightly more alarmingly ‘The inner and green bark  doth more forcibly purge; it draweth forth choler and watery humours for which cause it is good for those who have the dropsy..’ or  more promisingly (though the curative properties must be in doubt) ‘…the fresh flowers are mixed with some kind of meat and fried with eggs; they likewise trouble the belly and move the stool.’  However it was not for another 150 years with the publication of Hannah Glasse’s The art of cookery made plain and simple in 1747, that we find the first recipe for elderflower wine.

The use of elder flower to make a cordial seems more recent still. Mrs Beeton in her encyclopaedic  Household Management, first published in 1861, makes no reference (though she does provide a recipe for elderberry wine) and the idea seems only to have been taken up commercially after WW2. So the Thistledown Farm  enterprise  which was written up almost 30 years ago in 1993 by Duff Hart-Davis in The Independent, was something of a trailblazer. The tradition is still carried on at Belvoir Farm in Leicestershire, but all that remains at Thistledown now is the glorious scent when the flowers are in bloom in May and June, and a perfect spot to pitch a tent, even when wet.