Oxford’s Ashmolean Museum is hosting an exhibition ‘Last supper in Pompeii’ which celebrates the Roman love affair with food and drink focussing on the artefacts recovered from that devastated city. Lord and Lady Muck visited  the ruins last year. 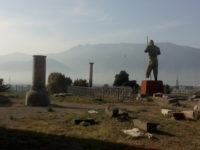 Even is mid-September it was hot, and the sheer scale of it at times  intimidating. Looking at the archeological discoveries, whether in the wonderful National Archeological Museum in Naples, or in the Ashmolean exhibition is a little more … digestible.  Naturally the museum’s focus on what has been recovered from under the volcanic ash, and the amazing things it has preserved. Food and drink are important but it has taken the Ashmolean exhibition to foreground them. What has survived casts a fascinating light on the lives of Romans in what was a pretty ordinary town in Italy. Pompeii was unique only in the sense that it was on the slopes of Mount Vesuvius and came to grief because Vesuvius was an active volcano. So the culinary culture of Pompeii while different from that to be found in the Britannia of the time was different mainly because of climate rather than culture. Fish and chips were served neither in Britannia nor Pompeii; no such thing as the potato in the Roman Empire of course.

The exhibition takes us on a tour of the fields, vineyards, orchards and seas around Pompeii including one of the more remarkable discoveries, the well preserved ‘footprint’ of a Roman vineyard just outside Pompeii. The Pompeian street is well represented, and this is where a visit to the place itself really brings the whole experience alive – the hustle and bustle of shops and bars – the bars in particular, which did also provide food, mainly for the less well off. 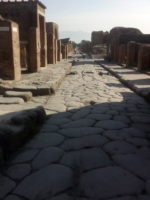 Food was more than just for eating. The gods needed feeding as well; perhaps they didn’t like the fare on offer just before Vesuvius erupted, and the buried remains of burnt offerings on display are there to remind us of the vital role of food and drink  in the religion of the time. It is interesting to speculate on how the gods are feeling these days.

Roman agricultural practices and cuisine  were naturally adopted in Britannia once it became part of the empire, but to keep up the exotic variety, plenty of food stuffs were imported for man and god alike; sacred pine cones (and their nuts) from the Mediterranean, tunny fish from north Africa, olives and wine by the barrel from southern France, dates  from Lebanon and pepper from India;  luxuries that all made their way to Roman Blighty two thousand years before we  think of these things as normal fare for the middle class household. And the dormouse was something of a delicacy in Britannia too, fattened up in a special cage. 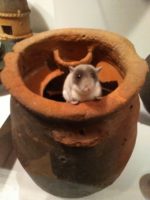 But not currently available at the Waitrose deli counter.

It is fun to speculate on what the civilised inhabitants  in the northern parts of the Roman Empire ate on a daily basis, and the Belgian cookery writer Brigitte Lepretre has made an attempt in her book ‘Ancient Roman cuisine’. As she warns us in her introduction, ‘it has proved necessary to use a little imagination to decide what a Roman dish could be like.’ She has re-worked a series of recipes written by Marcus Gavius Apicius, who was cook to Emperor Tiberius in the first century AD – around the time of the destruction of Pompeii.  Cook maybe, but a man of substance, wealthy with an inordinate taste for good food, even travelling to Libya in a ship chartered specially for the purpose, to  procure shrimps that had been praised to him. He didn’t rate them apparently. But his recipes survive, though Lepretre describes them as ‘hardly usable as they are: very often no quantities are given and cooking methods and times are not specified.’ Of course the very products used  two thousand years ago, vegetable marrows, fruit, spices etc (quite apart from the dormice) were probably rather different from what we know today. But the dishes are both appetising and exotic; green asparagus and ricotta patina, roasted mullet with fava beans, roast pork in pine nut sauce, braised guinea fowl with figs, lentils and chestnuts, and to finish up  fresh curds with honey and fruits. Last Supper in Pompeii maybe a treat but sadly the ticket price didn’t seem to come with a tasting menu.

Last Supper in Pompeii is at the Ashmolean Museum, Oxford until 12 January 2020