The Muck’s have been travelling. To Italy. The reason was to  commemorate and honour the memory of my uncle Martin Stott who  joined the Royal Marines after a year at art school in Liverpool during World War Two and was deployed first to Sicily and then to mainland Italy. He landed just north of Salerno  on 9 September 1943 in a somewhat ill-fated attempt by the Allies, led by the American 5th Army, to steal a march on the Nazi’s in the disarray following the overthrow of Mussolini and the Italian change of sides in the War.  Known as the Battle of Salerno it wasn’t our finest hour. Uncle Martin was a Captain in the Marines and was detailed to take a small village, Vietri  just north of Salerno and secure the steep narrow valley which had the main railway line and road running through heading north to Naples. 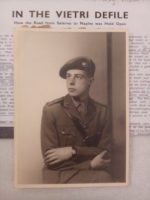 The Germans had other ideas, and a fierce battle ensued. They captured the village but he was killed the following day aged just 22, as they tried to push on up the valley. Tracking down a memorial, exploring the valley, and examining the beach where they landed at 4am on that fateful September morning (local restaurateurs would  probably charge them for the privilege if they tried it now) is emotionally draining so we took solace in one of Salerno’s greatest jewels, the Minerva Gardens. These days Salerno is a port city that the guide books describe with some justification as ‘gritty’.

But what a jewel the Minerva Gardens are. The Giardino della Minerva are right in the small old medieval city (an absolute undiscovered joy  in itself) accessed through a wooden door in a high wall from a narrow flight of steps. Inside, the garden which is small, tumbles down a series of  steep terraces – everything in the old city is steep.

It is part of a series of  walled and terraced vegetable gardens climbing from the Municipal Park by the River Fusandola to the Arechi Castle. It is old, founded in the early 14C by the  the medical writer and botanist Matteo Silvatico who taught at he Salerno Medical School, Europe’s oldest (it closed in the 19C). Recent excavations have found evidence of the original garden some two metres below the current surface. Silvatico cultivated some of the plants used to produce the active ingredients employed for therapeutic purposes in the medical school, ‘simples’ in the terminology of the times. This tradition continues today with the  plants  labelled  according to the medical ‘humours’ characterised as wet, dry, hot and cold and variations across these spectrums.   The gardens were set up as a charity after World War Two and restored over several years  from 2000 using EU funding and the garden is complemented by a pharmacy museum opened in 2008 in the adjoining house.

We arrived rather late – detained by so many fascinating aspects of the old city, but the early evening light and September breezes were a perfect context to absorb the sounds of the complex network of  fountains,

waterways and springs that keep the garden so lush, breathe in the fragrant smells of the lemon and other trees, and appreciate the amazing views over the  Gulf of Salerno. Closer too are the surrounding old city buildings with balconies, windows and lines of drying washing. One neighbour watering his own  garden on a terrace above managed to give Lord Muck an accidental dousing.

Despite the labels (mostly in Latin) identification of the plants wasn’t all that straightforward as so many grow much bigger than in England, flower at different seasons or are unfamiliar varieties. Shade isn’t just for the plants; a delightful terrace with a stunning view in front of the building housing the pharmacy museum  provides refreshments including a range of herbal teas. We could have spent twice as long as we did there, but closing time beckoned so rather than tea, a quiet beer in one of the nearby bars had to suffice. A toast to uncle Martin for bringing us to this delightful spot in the first place and a touch of sadness that he never got to enjoy it himself.