The Way of the Hen: familial reconciliation in the world of the Sussexes

I knew my correspondence with Prince Charles about chickens would assume national significance one day. That day arrived yesterday when *that interview* between Oprah Winfrey and Harry and Megan was aired on TV around the world. It was about 15 minutes in, that the matter of rescue chickens emerged. There were Oprah and Megan surrounded by the Sussexes rescue hens with Oprah clutching a box of eggs, and Megan with an artfully staged basket full. They looked good for rescue hens, a hybrid variety of uncertain name but certain egg productivity – for a year. But next time maybe they should go for Sussexes – they are such a lovely breed and great for beginners.  Anyway, they love chickens, their wee son loves chickens, their hen house is even named ‘Archie’s Chick Inn’ (that American love of puns again that I mentiond in my last blog, not just that ‘Chick Inn’, but the revelation that Megan’s first job as a teenager was in the ‘Humphrey Yougart’ milk bar – adorable).  And so does Prince Charles. Perhaps there is an opening here. Harry said in that interview that relations between him and his dad weren’t so good, and indeed Chaz wouldn’t take his calls. A sorry situation. Even an old republican like me can empathise about the family hurt. Which is where that chicken correspondence comes in.

Back in 2008, long before Lord Muck was even a twinkle in his creators eye, the muck narrative was  rolling. Warwickshire-based Garden Organic  and my employer Warwickshire county council (where I was amongst other things, responsible for waste management) were engaged in discussions about waste minimisation, in particular composting, and the practicalities of encouraging 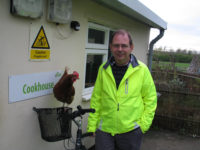 houesholders to keep chickens to reduce food waste. Prince Charles is Garden Organic’s Patron and the idea was ‘hatched’ that we would get his backing for the extension of the then already running Master Composting programme to include a hen keeping module.

So I wrote to Clarence House setting out some ideas. A copy of the hand-written notes on this made their way back to me, and remain one of my most treasured possessions. In response to the various suggestions that I put to the Palace, the Prince annotated my letter with comments like ‘Excellent’ and ‘Hooray!’ and signed off to his staff ‘This is encouraging news! Please keep a close eye on this as it develops because, if it works I would like to  push the whole concept to other councils…’  It ‘took flight’ as Garden Organic’s ‘Hens@Home’ programme, delivered to Master Composters across the country. Clearly a love of hens is a shared  interest between father and son, and here are Megan and Harry happy to share their love with Oprah and 2 billion viewers across the planet.

Living in California I’m sure the Sussexes are into spiritual growth. I’m not so sure if they have got round to reading Clea Danaan’s lovely ‘Zen and the art of raising chickens’  – the sound of one wing flapping, so to speak. But Charles dabbles in Buddhism (allegedly). I suspect that he is more of the ‘chop wood, feed chickens’  kinda guy when it comes to Zen Buddhism. There are many paths up the mountain, but surely ‘The way of the Hen’ is the one that will bring forth familial reconciliation.